What is the Best 14″ Electric Unicycle? Comparing the King Song 14D to the Solowheel Glide 2 & Segway S1

Most first-time buyers of Electric Unicycle will typically narrow their choices between one of three 14″ Wheels from the recognized manufacturers King Song, Solowheel, & Segway.

The Segway S1 was released shortly after Ninebot’s acquisition of Segway in April 2015. It was intended to be a successor to the popular Ninebot E+—the E+ gained a strong following in the Electric Unicycle world with it’s futuristic looks & innovations like Bluetooth App, but being a three-year-old Wheel, the dated specifications & lacklustre performance are now outpaced by newer 16″ Wheels. Ninebot had used the Segway brand for the new S1.

To the online shopper, Solowheel’s Glide 2 may appear to have more than a passing resemblance to the Inmotion V5F & he would be correct. The Solowheel Glide 2 is simply a rebranding from the Inmotion V5F, but now commands a significantly higher sticker price than the $695 Wheels sold the V5F at, until the Summer of 2017, when Solowheel took over sole US Distribution rights of the Inmotion Electric Unicycles. Our experience during the period we sold that Wheel, was that that this was sprightly, attractive Wheel, but lacked the power to support a Rider load exceeding 170lb with enough safety margin. The Wheel was prone to a higher than average board failure rate.

King Song’s 14D is the new kid on the block. It’s an evolutionary advance on two earlier generations, the KS14B, & KS14C. These earlier Wheels were innovative for their time, but also had serious design flaws which limited their popularity. Evaluating the three contestants on a technical superiority basis, there is no question that the 14D outperforms the other two Wheels in practically every criteria. 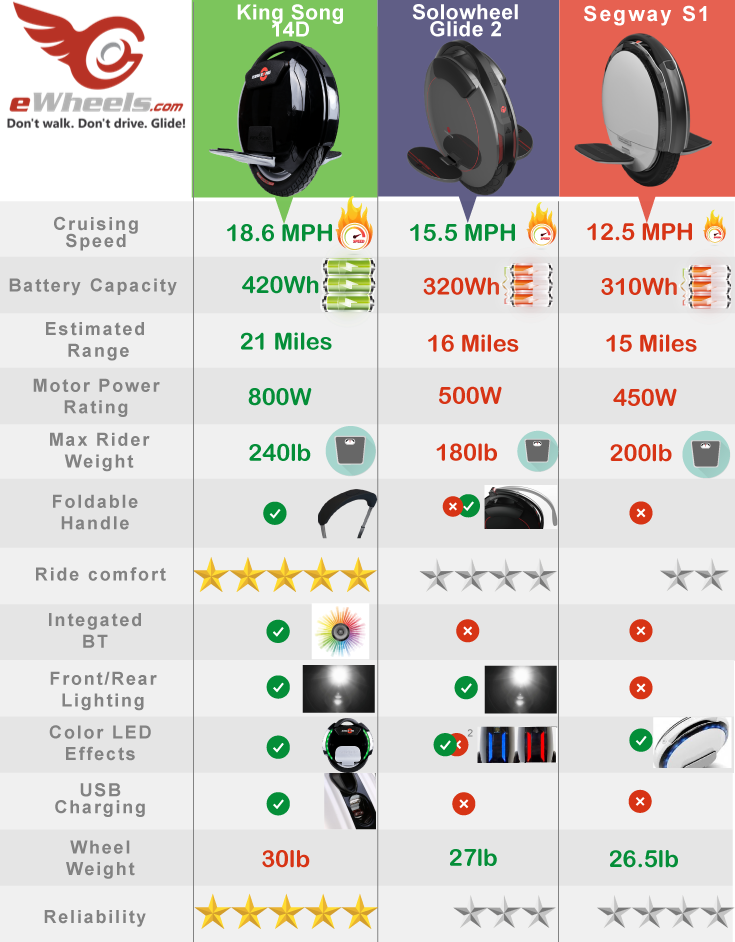 Specifications, performance charts & features may give an indication of how good

[or bad] an eWheel is, but the ultimate proof that both new & experienced Wheelers alike are looking for is ‘how does it ride’? The feedback from our Customers who have tried both has been overwhelmingly in favour of the King Song 14D.